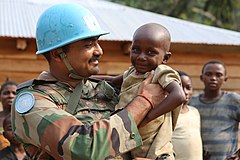 Tbilisi. August 30 (Prime-News) – The Headquarters of Joint Peacekeeping Forces objects to the detention of the Ossetian peacekeepers in the conflict zone and demands their immediate release.

“The detention of the three peacekeepers of the North Ossetian Peacekeeping Battalion is a rough violation of trilateral agreement,” reads an official statement disseminated by the headquarters.

The Headquarters of Joint Peacekeeping Forces call on the OSCE mission and demand the conduction of trilateral monitoring.

The Georgian law enforcement bodies detained Valiev and Khachirov on Wednesday. They kidnapped the journalists of the broadcasting company the “Rustavi 2” – Levan Jorbenadze, Archil Nikoleishvili and Davit Gvenetadze – and the “Mze” TV – Maka Gigauri, Zaza Kapanadze and Gela Alazashvili, while they were gathering data on detention of Davit Galegashvili, Kakha Brolidze and Dato Kvaratskhelia.

Embassy Of Kingdom Of Spain To Be Opened In Georgia

Tbilisi. September 04 (Prime-News) – The Embassy of Kingdom of Spain will be opened in Georgia in the nearest future.

The sides noted the necessity of deepening cooperation in the economic field, for which the Georgian side will create all conditions, including a necessary legislative basis.  A decision was reached to hold business forums alternatively in Madrid and Tbilisi.

At the meeting the sides discussed prospects for further cooperation in the OSCE framework, including the Georgian Government’s peace initiatives concerning resolution of the conflicts and OSCE’s role in these processes.

The sides focused on the 6 August incident. Mr. Moratinos pledged to employ all resources at his disposal as OSCE Chairman-in-Office to shed light on the attack on Georgia. Discussions on this matter will continue during his visit to Georgia as well.

The sides also spoke about the use of preventive diplomacy and elaboration of new mechanisms for crisis management.

An official statement made by the Ministry of Foreign Affairs of Georgia in response to Mr. M. Medvedkov – Head of Delegation of the Russian Federation on World Trade Organization (WTO) accession negotiations reads about that. Medvedkov alleges that the Georgian side ignores Russia’s proposal to hold bilateral negotiations.

The Ministry of Foreign Affairs of Georgia, reaffirming the readiness of the Georgian Government to hold the next round of bilateral market access negotiations with Russia within the framework of accession of the Russian Federation to the WTO and states that the Georgian Government has received no official request from the Russian Federation to this end.