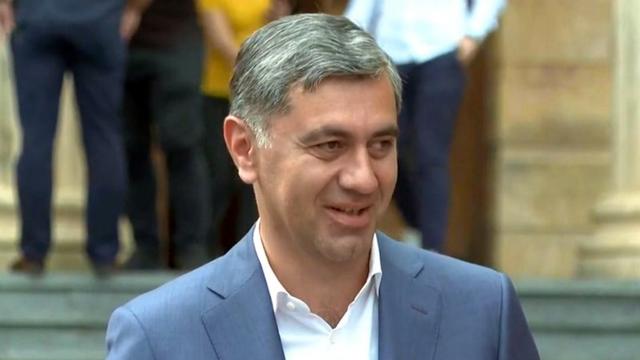 Koka Guntsadze, the member of the “Movement for Unified Georgia” stated at the briefing held on Thursday that the decision taken by Irakli Okruashvili was preconditioned by his difficult moral and physical condition. Guntsadze added that Irakli Okruashvili’s allies lay no claims to him.

ccording to the statement of Koka Guntsadze, they met with Irakli Okruashvili on Wednesday.

“After two-hour long meeting with Okruashvili, it became clear that it is extremely difficult for him to talk about the details,” Guntsadze said. “Irakli Okruashvili has done his job. He managed to unite the opposition and spoke truth and broke the fear. Under the current condition, at this stage, Irakli Okruashvili is quitting the politics.”

According to the statement of Koka Guntsadze, their team will continue fight against the acting government of Georgia. Opposition parties plan a mass protest rally in Tbilisi on November 02.

Tbilisi. October 13 (Prime-News) – The government of self-proclaimed republic of South Ossetia accuses the Georgian side of a new provocation.

According to the statement of Irina Gagloeva, Head of Press and Information Committee of de facto government of Tskhinvali, the building of the Ministry of Internal Affairs of self-proclaimed Republic of South Ossetia located in Tskhinvali came under fire late on Friday night.

Gagloeva evaluated the incident as another provocation of the Georgian law enforcer.

Presentation of the manifest will be held in house-museum of Ilia Chavchavadze in the village Saguramo.

The manifest includes 11 points. Members of the United National Council have elaborated it last night.

Tbilisi. October 17 (Prime-News) – The United Opposition reckons that the way out of the current situation in the country is to hold fair parliamentary elections in spring 2008 and elect a new government.

This point is highlighted in the manifest adopted by the National Council of the All National Movement today in house-museum of Ilia Chavchavadze in the village Saguramo. The manifest consists of 12 paragraphs.

The manifest is signed by leaders of the “Labour” party of Georgia, “Republican” party, “Conservative” party, “Freedom” party, “Way of Georgia” party, the “People’s party”, “Movement for the united Georgia”, “Ourselves” party, “Kartuli Dasi” party, and “National Forum” party.

The manifest stipulates that the government of Georgia should provide: democratic elections, country’s territorial integrity, independence of judiciary government, reinforcement of local governments, suspension of political violence, freedom of mass media, inviolability of property, worthy living conditions, originality of Georgian nation and its civil integration, implementation of concordat between Georgian Orthodox Church and the government, NATO membership and striving for Euro-integration.

According to authors of the manifest there is a grave social-economic and political situation in Georgia.According to them, it is necessary to consolidate the whole society and opposition political forces in order to prevent serious social and political cataclysm in the country.

One of the stages of the program includes the issues concerning forest fires, which engages employees of Emergency Situations Management Department as well as the firemen of local self-governmental agencies from different regions of Georgia.

Certificates will be issued to the trainees upon completion of the program.