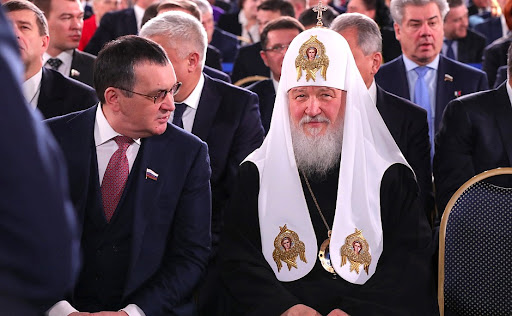 Tbilisi. November 09 (Prime-News) – The Catholicos-Patriarch of all Georgia Ilia II reckons that Mikheil Saakashvili, president of Georgia, made a timely decision by announcing early presidential elections.

The Catholicos-Patriarch of all Georgia Ilia II told journalists after meeting with the opposition today that the president undertook all steps to release tension in the country.

The Patriarch noted that representatives of the opposition and government expressed their will to release tension during the meeting with him.

He expressed hopes that dialogue between the sides would resume and end with positive result.

Parliament Approved State Of Emergency In Georgia For 15 Days

Tbilisi. November 09 (Prime-News) – The Parliament of Georgia unanimously (with 149 votes) supported decision of the president of Georgia and approved the state of emergency on the territory of Georgia for 15 days.

Nino Burjanadze, Chairwoman of Georgian Parliament, stated at the plenary session today that although the situation has stabilized in Tbilisi since November 07 and in the rest of Georgia, threat to stability still exists.

Burjanadze expressed gratitude to the Catholicos-Patriarch of all Georgia Ilia II for his appeal towards the nation not to yield to provocations of external forces.

Burjanadze appealed to a “healthy representatives” of the opposition for dialogue and noted that she was ready to meet them after completion of the session today.

The presidential decree, which was signed at 23:30 on November 07 imposed restrictions on the press, demonstrations, and strikes, among other activities. The state of emergency expires on November 22.

State Of Emergency Not To Hamper Presidential Elections On January 05

Khatuna Gogorishvili, Chairwoman of the parliamentary committee on procedural issues, told journalists about that today.

The Parliament of Georgia unanimously (with 149 votes) supported decision of the president of Georgia and approved the state of emergency on the territory of Georgia for 15 days.

According to the constitution, holding of the elections is allowed only after the state of emergency is lifted.

Namely, there are all conditions for Mikheil Saakashvili to resign on November 22, after the state of Emergency will be lifted at 23:30. At the same time the Parliament will be able to announce date of the residential elections scheduled to January 05.

At the moment presidential candidates are: Mikheil Saakashvili, acting president of Georgia, David Gamkrelidze, leader of the “New Rights” and Gia Maisashvili, leader of the “Party of future”.

Prime-News was told at the Ministry of Foreign Affairs of Georgia that the Georgian Foreign Minister provided his Lithuanian counterpart with the latest information on the existing situation in Georgia.

The sides discussed a broad spectrum of bilateral relations. Discussions also focused on the process of Georgia’s integration into the Euro-Atlantic structures and the issues of regional cooperation.

The Georgian Foreign Minister reaffirmed the irreversibility and firmness of the priorities of Georgia’s foreign policy, including in terms of integration with the European Union and NATO.